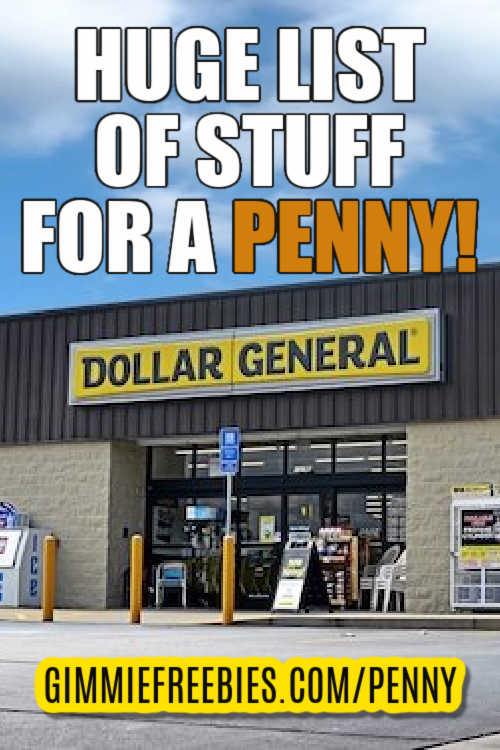 Don’t miss our 2021 Dollar General Clearance Event Schedule! And, if you’re lucky enough to live near a store that’s planning to remodel, then you can really score! Don’t miss our tips on how to find Dollar General Remodel Clearancesales! We also have a handy chart of UPCs that you can use to quickly add to your app to stalk upcoming remodels!

Be sure to check them all, since penny items may be available from past weeks! Pennies can be valid for 6 months or more, and we’ve heard of people finding pennies a few years old!

This is what Dollar General looks like when you arrive:

And this is what Dollar General looks like after Penny Shopping! LOL!! While some stores don’t know how to do clearance, DG is one of the best. Dollar General Penny List Items are just what they sound like, they’re marked down to only 1 cent!

While some stores don’t know how to do clearance, DG is one of the best. Penny Items are just what they sound like, they’re marked down to only 1 cent! Keep reading to learn why they do this, and how you can find them all!

How Can You Get Products for a Penny?

Tips: Get there early! Try getting to the store right when they open on Tuesday (or whichever day it is, based on your location and whether Tuesday was a Holiday).

And don’t forget, you can get DG store coupons on their website and app! Be sure to consult the Dollar General Coupon Policy.

Don’t miss our tips on how to find a Dollar General store remodel clearance, because you could find tons of pennies!

There are a few things you should know about finding pennies. First, know your store. There are different types of stores, for example, regular DG, NCI and DGX.

What’s a Dollar General NCI store? An NCI (non-consumable initiative) store is a home store which carries more interior decorating and decor items and not consumables such as food. They’ve honed some DG stores into home stores to carry home, domestics, housewares, party and occasion. Whereas, a DGX store which is more like a convenience store with very little home decor or clothing.

How can I tell if it’s an NCI store? To find an NCI stores in your area, tap the 3 lines on bottom right of the official DG app, select Stores, then tap Filter, select DG Finds, and Apply. Another term you’ll hear about Dollar General, is POG which means Plan-o-Gram. This is a type of retail merchandising where they strategize the best way to display products. They develop a visual plan, called a planogram, to plan how products are placed on shelves in effort to increase sales.

Why Are Items a Penny? Is it a Clearance Sale?

Penny Items at Dollar General have either been hard to sell, are discontinued products or after Holiday close outs.

Maybe in some areas a certain product doesn’t sell. DG will mark them down in steps, all the way down to 90% off clearance.Then, if there’s any left, they discount them to a penny. But, penny items aren’t really clearance items.

Often, manufacturers will stop making a certain product. Maybe it’s Tide and they want to change the scent. Or, maybe they change the size of the product. Either way, they’ll discontinue the old version. And as a result, they’ll close them out all the way down to the 1¢ sale.

Of course, Holiday close-outs are popular in most stores. For example, after Valentine’s Day, stores close out chocolates and candy, and other holiday-themed items at a step-down sale discount. In other words, they’ll start at maybe 50% off, and after a set amount of time they’ll increase the discount to 75% off and so on. It’s at the end of those mark-downs that the penny items happen!

The reason Dollar General discounts all the way to a penny is to alert sales associates that it’s time to pull the merchandise from store shelves, to be donated to places such as Goodwill, or to be destroyed. Actually, many people report finding merchandise that has been thrown away by dumpster diving behind Dollar General stores! Of course, we’re not suggesting you actually do that. Please keep in mind that although DG clearly states in their official policy that items are to be sold, not all stores will comply. Some managers may refuse to sell penny items. We have heard reports of both. Some people are able to find penny items regularly, and some cannot find them. Some readers who work at DG or worked there in the past also shared their very different experiences with penny items. Per the penny policy, anything that rings up for a penny should be sold to the customer and any remaining on store shelves should be removed immediately.

How Can You Get Products for 1 cent at Dollar General?

The first rule of penny shopping at Dollar General is NEVER TALK ABOUT PENNY SHOPPING AT DOLLAR GENERAL. In other words, don’t ask the staff if there are any penny items. Don’t ask them to check in the back. And, don’t hide items before they penny so that you can buy them. Be fair and be polite.

Second, check the current list of Penny Items. Then, check older lists! Sometimes things stay a penny for a while but then go back to regular price. It pays to check!

Third, if you find penny items on the floor (in store, at DG), then take all that you want. This isn’t the time to be cordial and ‘leave some for the next guy.” While that may sound harsh, if you look at the policy you’ll understand. As soon as they know there are penny products on shelves they will go immediately to remove them. There will be no “next time.”

Fourth, if staff refuses to sell you penny items, then report it to corporate. Don’t argue or fight with staff. Couponers have already gotten a bad name with store employees by misbehaving. You win some, you lose some.

Next, learn how to read the tags at Dollar General.

Finally, it’s important whether it’s a gray dot, a yellow square or a blue triangle! If noted, you’ll want to pay attention to that on the tag. Some of the markdowns will specify. Get there early! Try getting to the store right when they open on Tuesday (or whichever day it is, based on the sale, your location and whether Tuesday was a Holiday).

Scan EVERYTHING! You can use the scanner on the free Dollar General app. Find it in the Apple App store or Google Play. TIP: Sign into your account and the scanner works better! Stores should have a free guest wifi account that you can use too. Because, internet in stores can drain your battery fast – and may not work at all because of the type of building. If you scan something and it gets an error or says something like, “this can’t be sold at the store and to give to an associate,” then double check that you are on the correct store in the app!

If you are on the correct location (the store that you’re at), then try using the list scanner instead of the main page scanner. Find it by tapping LIST at the bottom of the app, and using the scanner there. For some reason the app has been glitching. Be sure to consult the Dollar General Coupon Policy! And don’t forget, you can use digital DG store coupons on their website and app! Don’t miss another freebie! Get Instant Freebie Alerts here! Find the Newest Freebies posted here! Then, JOIN all of our FB Groups! 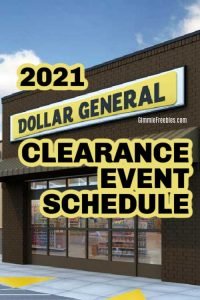 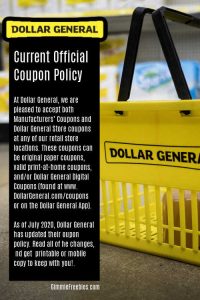 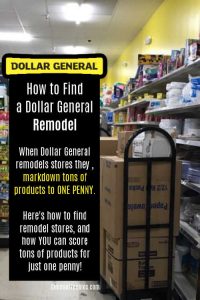